With nearly twenty years of Project Management experience, I have had the luck the last five or six years of managing big, important projects. Often the biggest project in our portfolio. The kinds of projects that come with a big stick.
So it was a shock recently to be given a small project. We didn’t have a lot of work in the funnel, and I have never been one to think any good work is beneath me. I was happy to take it on. It will be easy I thought.
I ramped it up like I would any project. Reviewed the Statement of Work and the Budget. Pulled together the team for a kick-off. Built a plan with dates, documented a charter, started down the road to building our deliverables.
And missed the very first design deliverable. The architect kept missing meetings.
We all know how to deal with this. Get them to commit to dates, times, and deliverables. Ask them to commit in writing to meeting the new dates. Micro manage if need be. Bully, nag, threaten. Every Project Manager has these tools in their tool box.
Now if I had to use these tools on every project, every day, I would have moved on to another career fifteen years ago. We all know it is best to inspire people, get them enthused about the project, have them take some pride in what they are delivering. A team that ‘owns’ the project is a team that will deliver superior results. And most people take pride in their work. Unless they are told it is not important.
And that was the message our organization was sending to this project team. There are important things to work on, but this isn’t it.
First the architect, then the detailed designer, then one subject matter expert after another was told to back burner this project work, and make the more important work their focus.
Nobody ever told me. I was told this project needs to be delivered on time, on budget come hell or high water. So I pushed, I prodded, I escalated. I went to a director and complained about resources. And he gave me the straight goods. Lighten up Francis, you’re pushing a rope.
Fair enough. I get it. Organizations need to set priorities, and this project is a low priority. So I put it on the back burner just as the larger organization had. I worked it enough to keep it moving forward. I did at least two project change requests to extend the end dates. Three months, then another three.
I’m an experience senior project manager, and I have had the luck to be managing those big projects that suck up all the good resources. Now the shoe was on the other foot. Fairs fair.
But, a new Program Manager came to town. He needed to show the world he was tough, he could get things done, he would get these yellow and red projects back on track. The new broom that will sweep clean. And he set his sights on me.
If I was a young inexperience project manager, he would have broken me. He tried to convince me I was lazy, incompetent, underperforming. He started hounding me, micromanaging me, nagging me, bullying me. All those tools we talked about above. And if that is all he has in his tool kit, his career is already half over.
A junior PM would have been in real trouble. But I am not a junior PM. And I can call a spade a spade. The organization has made a decision. Well above both of our pay grades.
In the very nicest language I know, I told him to pound sand. Now I didn’t use exactly those words. But he got the message. He went and complained to someone; who I am sure told him, ‘lighten up Francis, you’re pushing a rope’.

This thread comes from the ‘Writing Ethnically Different Protagonists’ thread and concern I have from a reviewer.
I have a character in my work, Ruth, who is a North American Native woman from Saskatchewan. She is abused. I am neither a woman nor native. An artist friend who is reading the draft suggested I could be called out for Appropriation of Voice with this character.
I have done some research and found the Canadian Author Margaret Atwood was accused of the same thing with Pauline and Surfacing.
I don’t want to change her background, her culture or her history. She plays an important role in the story and as a metaphor for our Canadian society.
But I want to be empathetic to the Aboriginal culture, history and concerns. Does anyone have any thoughts on how to avoid the charge?
thanks 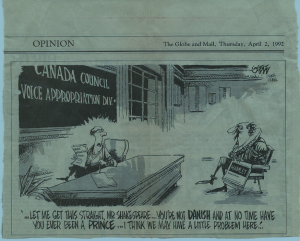