Over the last few days we have seen images of children being torn from their mothers. There are reports of camps being setup in Texas and children in cages. The similarities to concentraction camps is too easy to make.
And now Jeff Sessions and Sarah Sanders are holding up the bible to justify their heartless cruelty.
There is no empathy in this Administration. That Donald Trump was damaged as a child and is now a narcissistic socio-path incapable of seeing people as humans is a given. Trying to appeal to his heart is useless.
But he does care about something. His Name. How he is percieved by the public. His image on TV and Twitter. His brand.
Trump towers are supposed to be luxurious. Mara-Lago is better than Disney Land. Trump University, Trump steaks, Trump Casinos. He loves to see his name on everything. So let’s put his name on this. Let him own it. #Trumpcamps.
Every conversation, every story, every image of families being torn apart and people being thrown in jail for misdemeanor crimes and having the audacity to beg for asylum , needs to be tagged and branded as a trumpcamp story.
Right now it is a bargaining chip. Let it be more. Let him own it. Let it be Donald Trump’s legacy,his place in history. #Trumpcamps 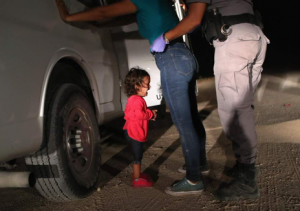