Continuing my series of book reviews for writers, today I tackle someone who lives here in the same city, Vancouver.
As I write this, I am debating whether I should slant my reviews in the hopes that my book, when it is finished, will be more likely to get an excellent review in return. That is how I think so many reviews read, and it is wrong. At least for this series, which is supposed to inform both myself and others about the craft of writing, what a writer does well, and what doesn’t work so well is my honest goal. If anyone thinks, sees or senses that hunt for reciprocals in these reviews, please call it out. Because I know literary circles are not that big, I worry about running into someone whom I give a less than glowing review of their work. But as I always coach writers, Be Brave!
I liked this book, and wanted it to be better. I live in North Vancouver and we have a large Persian community . I have heard Tehran is a beautiful city, deep in history, and this book caught some of that.
Hozar may have been trying to do too much in this novel. The sweep of generations, family, loves, rivalries. The history of religion and Persian nationalism, political repression, Muslim misogyny. The meeting of world religions in the crucible of revolutionary Iran. My thought would be to either add material to do justice to all of these themes or to edit out some and have them become background setting. As is, none were fully fleshed out or well presented. I think a lack of confidence in her voice hobbled the author.
My knock on the book was the narrative distance with the characters. Regular readers of my reviews will know I am a huge fan of close third person. I want to immerse into a story and smell, taste, hear, feel and think like the main characters. I want to experience their world and understand their thoughts and actions. That is the attraction of the novel for me, and that is the bar I set for any novel I read and review.
I wasn’t always sure who’s story this was. I defaulted to Aria, but many actions and scenes had nothing to do with her. And the large cast of characters was hard to keep straight.
But reading the scenes with Aria, Hozar flirts more with a distant omniscient narration. This creates a distance that makes it hard to empathizes with her. I didn’t understand her reasoning at times, because I was watching her rather than experiencing with her. When she threw the boiling water on Mrs.Shirazi, I thought less of her. I never understood what she wanted or needed, and I felt a lack of agency on her part to move the story ahead. When her father died, there was nothing. If she was in love with Hamlet, I never felt that. If she was hurt at losing Mitra or understood how hurt Mitra was, the thought never seemed to cross her mind. And pet peeve, her career aspiration was to be an accountant?!
A good first novel. I think she needs an editor to tell her not to be afraid, not to couch or soften her approach. To show the feelings and thoughts of the characters. Be honest, be brave.

Norman Doidge ‘The Brain’s Way of Healing: Remarkable Discoveries and Recoveries from the Frontiers of Neuroplasticity’

I previously read Doidge’s ‘The Brain that changes itself’ and was impressed. I suffered a minor Traumatic Brain Injury (mTBI) in June 2019, and have a personal stake in understanding and using methods to treat mTBI. Understanding neuroplasticity and learning methods to relearn skills has been a primary goal over the last two years. So I came to this book with high hopes. I was disappointed.
I am writing a series of book reviews for writers, and my focus has been fiction and creative writing, but I see problems here that any writer should know.
The biggest fault with this second book is the length. It needs a good edit. Doidge gives long detailed descriptions of patients, their histories, their personal situations, personalities, lack of progress until they engage with him, and then a long narrative on their progress. The first one or two are informative, but there are too many of them. I skimmed these details, looking for the meat of the theory and treatment.
There are impressive gains happening in the fields of understanding the brain, injuries and illnesses, understanding neuroplasticity, and Doidge captures that well. It is a wonderful time to be a researcher or clinician in this field. And I am sure Dr. Doidge enjoys speaking about his work. But as in Hamlet, brevity is the soul of wit. The author needs to make his point and then move on. If he really thinks much of this narrative is needed, footnotes or an appendix would be a better approach. I ended up skimming the last third.
And my final knock on the book was related to a back cover comment, ‘Doidge uses stories to present innovative science with practical real-world applications, and principles that everyone can apply to improve their brain’s performance and health.’ But it wasn’t so. So much of the treatments involves lasers or a PoNS device that the patient puts on their tongue while doing exercises. I felt much of the book was an advertisement to enroll in paid clinical work, at tens of thousands of dollars. I had echoes of Tom Vu saying ‘Take My Seminar’.
Disappointing. 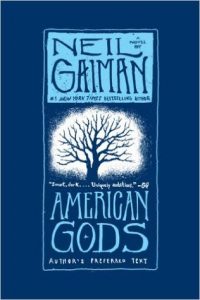 Continuing my series of book reviews for writers, today I tackle someone who is a favourite of many, Neil Gaiman, and his ‘American Gods’.
I wish I could write this well. The language is wonderful, the descriptions are full and satisfying. The word choices and the depth of research are astounding. History and hard work are on display here.
Reading his own comments on this tenth Anniversary edition of ‘American Gods’, I laughed to read that some people love it and some hate it. I don’t fit neatly into either camp, but can see some faults that bothered me.
Almost every writing course I have taken has spoken about character arcs, having the main character (MC) want something, need something, and finally learn something. I don’t get that in Gaiman’s books. The MC seems to just be along for the ride. Richard in ‘Neverwhere’, the boy/man in ‘The Ocean at the end of the Lane’ and Shadow in ‘American Gods’ are passive observers. We don’t know what they want, and they put no active agency into getting it. As a result I read without much involvement. If the characters don’t have much invested, why should the reader?
The second fault I had was with the story. Spoiler alert. Two groups of Gods are fixing to have an epic battle. The suspense builds. Why they are battling is not clear, and the stakes, beyond their lives, is less clear. These Gods don’t seem to have all that much real power over the society, America, they purportedly rule. And who exactly is prodding on the war is not clear. But then, the war doesn’t happen. Return to status quo. Whoa.
There may be too many characters to keep track of, and while I don’t like the cartoon character naming of people, it does help address the large cast.
I felt this book could of had a bit better editing, but famous authors seem to make editors gun shy. Pity. Shadow hung from a tree dying for nine days, during which thoughts and images and history went through his mind, until I was hoping he would just die. Enough.
And then the worst fault, the magic rebirth. If people cannot die, the stakes are reduced to ‘Who cares’. In ‘NeverWhere’ and ‘American Gods’ people die and then magic wand, come back to life. Because I expected Shadow to come back, I wasn’t worried about him dying. Again, a lack of investment by the reader in the character and the story, which weakens the whole thing.
I was looking for some sort of metaphor of this story to American life, but if it is here I missed it. New Gods versus old Gods I sort of got, but this is a mainly rural book, so the push and pull between city and rural is missing, as is the conflict between left and right, Red and Blue. So many issues like race, poverty, guns, religion, abortion, etc, are ripe for discussion if only metaphorically, and with a title like ‘American Gods’, I think that is what I was expecting. Sadly, no.