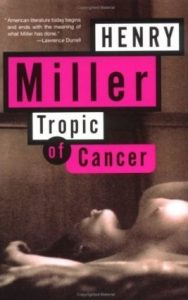 I have just finished reading Henry Miller’s ‘Tropic of Cancer’. I love his vocabulary, the use of words, and the images he evokes. It is soaring languages in places, but it is also a dirty, squalid book, reveling in pornography and filth. I remember a university professor describing Ben Johnson as documenting a pub crawl across England. In ‘Tropic of Cancer’, Miller documents a slither through the whorehouses and the cheap side of the arrondissements of Paris. He likes to use the ‘C’ word, and the ‘N’ word, for their shock value. But it gets old, and soon I have an image of a three-year-old who realizes saying ‘Fuck’ will get him all kinds of attention. I would say there is some adolescent qualities to Cancer, but Miller was forty-three when it was published. But it is a version of a Peter Pan story, or at least an American Peter character, refusing to grow up.
At two-thirds through the book, I was still trying to discern a story or a character arc. I don’t think the main character, Miller, grows at all.
It is interesting to read Anais Nin’s ‘Henry and June’, to get a different perspective on some of the same time period. Nin clearly calls out the need for emotion connectivity.
Other reviewers have labeled Miller amoral. George Orwell said ‘and after all, he is a completely negative, unconstructive, amoral writer, a mere Jonah, a passive acceptor of evil, a sort of Whitman among the corpses’.
And a modern reader will pause over his treatment of women. They are the C word to Miller, not much more. Or Madona’s to be worshipped. Mona and Tania, who I understand are his wife June and Anais Nin, are idolized, but not presented as full genuine characters.
Miller observes, but never connects. There are no relationships beyond drinking buddies. It is funny that I have read Miller critique DH Lawrence as too intellectual, but Miller’s prose is all in the head or the groin, there is no connection to the heart. They copulate, but they don’t know passion or love.